Feel yourself a true gladiator and be able to fight to conquer this empire!
Take part in amazing mini adventures filled with adrenaline, choose your horse and win the highest prize.

There are 14 different prize patterns, 12 extra balls and a wildcard.

Be strong and win this battle.
For fun 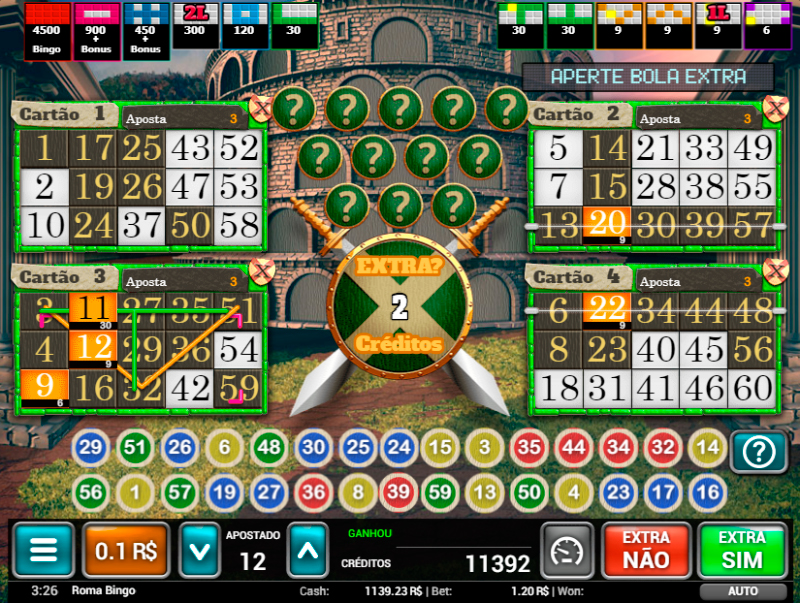 How to play Roma

The user decides how many cards to play in the next game.

To start the game, it is an indispensable condition to have enough credits to cover the selected bet and press PLAY.

Each card shows the amount wagered to have this card open, but at the time a prize is won, the indicator is changed and the amount of prize we receive with that card is shown.

Once a prize containing another prize is celebrated, the last is discarded and only the value of the first is won.

At the end of the game, the machine will indicate to the player, the value received, the final prize won.
The player can change the card numbers by pressing them.

This will cause the cardboard to show different numbers randomly selected.

The player has a mechanism to start the game automatically called AUTO, whose purpose is to just start a game while the previous one is finished.

Pressing the button will display a menu so that we can select how many automatic games we want to play and if we want all the extra balls to be bought.

The player can buy the balls he wants (maximum 12).
In the center of the drum will be shown the cost of each ball, which will be dynamic depending on the probability of the prize and the gain.

Bonus
Once the game has ended (including the purchase of Extra Balls) if the player has obtained a value that in the profit plan indicates "BONUS", he will have access to a BONUS.

The player will have the option to increase the final prize of the game through fun and colorful "mini-games", which are part of the basic game, which we will call Bonus.

Play for real
For fun
Champion

Play for real
For fun
Power